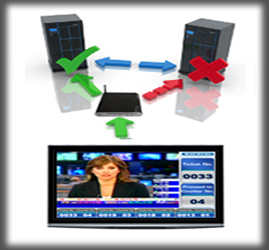 Wavetec has come up with a new Server Failover System to ensure that your displays are up and running despite any issues that you might face. It is one of the major concerns of marketers to ensure that if they are branding their products on DOOH (Digital out of Home) displays, they don’t face any technical issues as each second is being paid for. However, it is not only for them that such a solution is needed but every industry has their own use of it. For instance a failure in displays at Stock Exchange or Brokerage Houses could result in thousands of dollars worth data being lost. Similarly in the Retail Sports, Media and Transport Industries a failure in the display cannot be tolerated because that can result in a loss and depict their brand as not promising enough. For that reason, a Server Failover System has been made to ensure adequate backup in case of an emergency.

Failover is a word used in IT circles to describe the capability of a system automatically switching over to a redundant or standby system in order to keep running smoothly when the initial system fails for some reason. If the first system goes down, the standby or redundant system will automatically kick in so there is no interruption. The Wavetec Failover Mechanism is automatic switching to a redundant or standby Failover computer server system. The failure or abnormal termination of the Primary Database Server, or network, the Failover Mechanism will automatically switch all connected players to Failover Server Instantly.