Etihad signs up with Wavetec to reflect Arabian Hospitality towards their valued employees! 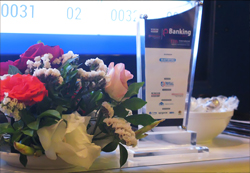 eBanking Conference & Exhibition held in Karachi on 25th April, 2013 at Pearl Continental Hotel, is an annual ritual now with this year being the 11th consecutive year of having a successful eBanking event in Pakistan. This platform brings healthy discussions by professionals who have had years of experience in the Pakistani IT industry.

Participants to the convening hailed from banks and IT solution and service providers where not less than 23 IT companies were represented. The banking payment system infrastructure is still under developed even though recent years have seen growth in

both the scale and scope of electronic banking transactions. Speaking as chief guest Mr. Ashraf Muhamood Wathra the Deputy Governor of State Bank of Pakistan said that stake holders in the industry are involved actively to work on the central bank agenda and continue to work closely with the regulator to penetrate in the rural and urban population of the country.

Wavetec participated as Co-Sponsors at the event where Mr. Ayaz Faiz – Head of Sales of Pakistan, Afghanistan and Bangladesh represented Wavetec and emphasized on the growth of eBanking and the IT industry over the years. He said “This event is undoubtedly a premier event in Pakistan that brings together the whole eBanking industry from banks to technology solution providers and regulators and offers them a platform to connect and exchange ideas. Wavetec is proud to have been associated with this event”.